When Sheikh Farid grew up, he went to a Mahatma because of intense interest of bhakti. That mahatma was an ascetic. He said, son, salvation is not possible with fasting, namaaz and meat consumption. If you want to achieve God, then relinquish all the wrong ways of worship and do meditation. Sheikh Farid abandoned all his traditional worship and started doing service of his Guruji as a prime disciple and also did meditation as directed by his Guru. When his Guruji used to do deliver the spiritual discourse, he used to say that Allah (God) is formless and then used say that the only way to see the God is to do intense meditation. Other disciples also used to live in the ashram. Guruji had grown old. Everyone used to serve the Guruji in turns. Sheikh Farid was the best in the eyes of his Guruji. The other disciples thought of making Sheikh Farid fall in the eyes of Guruji so that Guruji remained happy with them. Guruji used to smoke a hukkah after having meals. Even if there was a two minute delay in getting his hukkah, Guruji used to cane the responsible disciple. The day Sheikh Farid's turn came, other disciples doused the fire which Sheikh Farid had prepared for the hukkah. When Sheikh Farid went to fetch the hukkah for Guruji after serving the meal, he found the hukkah fire doused. It was a rainy season. Sheikh Farid thought, the fire might have been doused by the moisture in the air. He was afraid of Guruji getting angry and was worried in case Guruji got upset, all his service would go futile. On thinking this, he took the chilam of the hukkah and ran to the nearby village which was at the distance of half a kilometer. On reaching there he asked a lady for fire. That lady was struggling with the fire in her oven while she was making chapattis. Because of rainy season the fire was repeatedly dousing. She was already annoyed and Sheikh Farid asked for fire. Out of irritation she said, "I have destroyed my eyes while making this fire, you also destroy your eyes, then only you would get fire."

Sheikh Farid thought, if he would not get any fire then his Guruji would get angry and his bhakti would be in vain. Then what will happen with this body?

On thinking this Sheikh Farid pulled his eye out using tongs and presented it to the lady and asked for fire. When that lady saw that Sheikh Farid has literally pulled eye out, She out of fear pulled out fire from her oven and gave it to Sheikh Farid. Sheikh Farid covered his eye with a cloth, kept the fire in chilam of the hukkah and ran very fast. Guruji had already called for Sheikh Farid twice asking for hukkah. After calling the name on three occasions, if a disciple had not presented himself in front of the Guruji, then Guruji out of anger used to pick up a cane. When Guruji called Sheikh Farid's name the third time, he was at a distance of 200 feet and said, " I have come." Guruji while smoking the hukkah asked Sheikh Farid, "what happened to your eye?" Sheikh Farid replied, "nothing Guruji, an insect had gone in to the eye and has now come out. What can happen to a servant in your refuge? On hearing this Guruji started relaxing and Sheikh Farid silently kept on suffering from pain within himself.

In the morning, that lady brought that eye to the saint and asking for forgiveness said that in the night your disciple had come to me asking for fire. I was frustrated trying burn the damp wood. Out of irritation, I asked your disciple casually to destroy his eye if he wanted fire but he literally pulled his eye out. On saying this she showed that eye to the saint. Then Guruji called Sheikh Farid and said,"so much sacrifice?" Then Sheikh replied that, Guruji the whole body, rather every speck of this body is presented to you, then what significance has this eye got, Master?

Guruji asked Sheikh Farid to remove the cloth. When Sheikh Farid removed the cloth, the eye was completely healthy but was slighty smaller in size, i.e. the eye was not bad anymore rather became healthy. After a few years Guruji passed away. Shekih Farid thought if from this human body, he is not able to attain God, then the whole life is a waste. 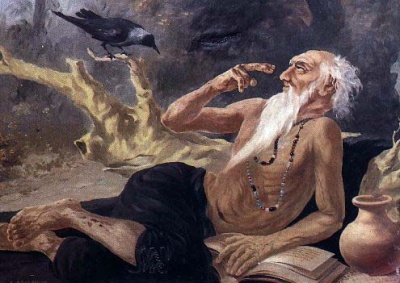 He used to tie himself from his feet to a branch of a tree and then used to hang himself upside down deep inside a well, above the level of water and stay there for hours and meditate. He used to intermittently have food. Twelve years passed but he did not achieve God. In twelve years he consumed 50 kilograms of grain, due to which, he grew very weak. The flesh on his body shriveled. Considering Sheikh Farid to be dead, crows gathered around his body to pluck his eyes out. Sheikh Farid thought that the life is coming to an end but he hasn't attained Allah (God), What shall he do now? He said to the crows, "O crows, if there is any flesh left on my body then eat it that but leave my eyes, I may get to see Allah one day." On saying this he started crying profusely and went back in to the well.

Then Supreme God Kabir Sahib came and pulled Sheikh farid out of the well. When Sheikh Farid came out, he said,"why are you disturbing me? What have I said to you, You do your own job and let me do mine."

Kabir Sahib said that I am Allah (God). On hearing this Sheikh Farid said, "dont joke with me, Allah is not like this.

Kabir sahib asked,"what is Allah like then?" Sheikh Farid replied that Allah is formless. He is invisible

You are doing hard labour to meet God and then yourself you are saying that God is formless ! After hearing these lines, noble soul Sheikh Farid understood that this man is some knowledgable soul. Sheikh Farid fell in to Kabir Sahib's feet and said,"please tell me the true path, I have suffered a lot." Kabir sahib said,"God cannot be attained by meditation. With meditation one becomes a ruler of a kingdom and then after ruling, is doomed for hell and the 84 lakh species of life and death." "Your Guruji showed you the wrong path and were unknowledgeable. He has wasted your life."