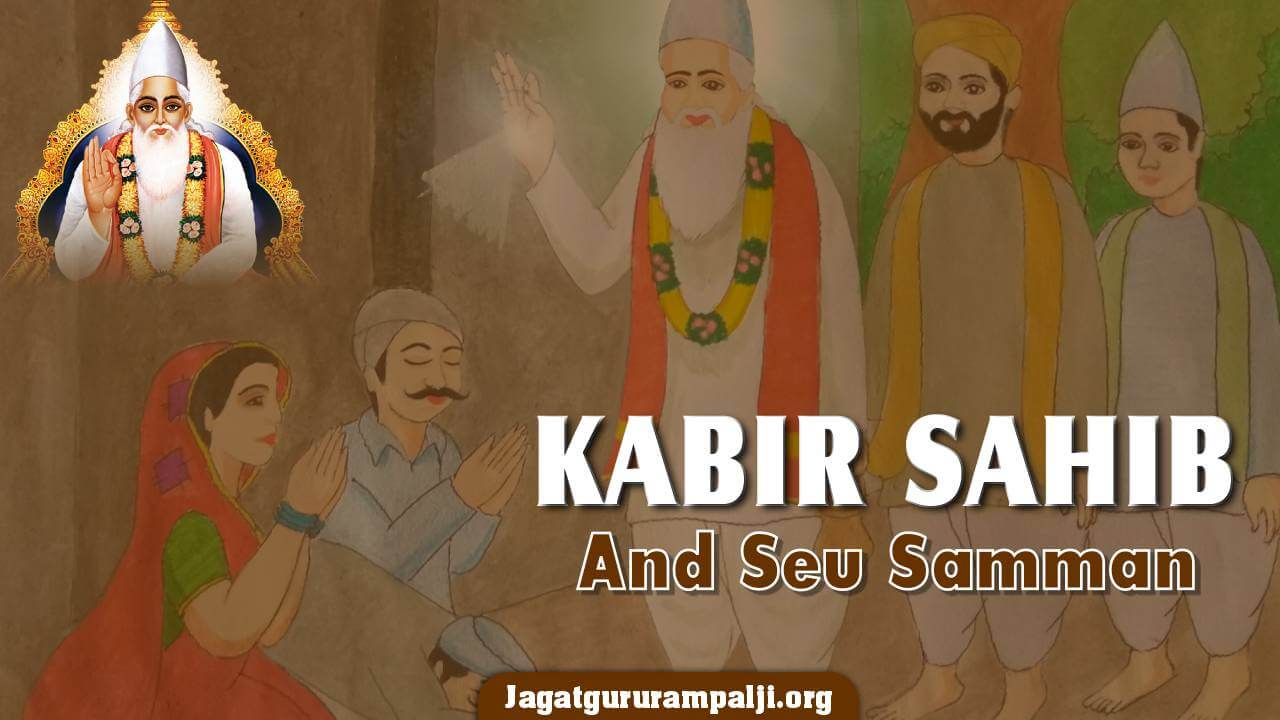 Restoration of a Dead Boy Seu to Life by Kabir Sahib

Once, Sahib Kabir made a surprise visit to his devotee Samman’s place with his two disciples (Kamaal and Sheikh farid). Samman had a family of three. Samman, Samman’s wife, Neki and Samman’s son, Seu. Bhakt Samman was so poor that at times there was not even a grain of food at home. The whole family used to sleep empty stomach. Today was a similar day. Bhakt Samman asked his Gurudev Kabir Sahib, “Please tell me about your plan. When would you like to have food?” Kabir Sahib replied, “Bhaai (brother), we are hungry. Prepare food.” Samman went into the house and said to his wife, Neki, “Our Gurudev has come to our house. Prepare the food quickly. Neki said, “There is not even a grain of food at home.” Samman said that bring some on debt from the neighbours. Neki replied, “I went to ask for flour, but nobody lent me any. Despite having flour, they intentionally did not give it to me. And are saying that today your Guruji has come to your house. You used to say that our Guruji is God. If your Guruji is God, then why are you begging? He will fill your stores. By saying such things they started ridiculing me. Samman said, “Give me your rag. I will pawn this and bring 3 ser (around 1 kg) flour. Neki said that this rag is torn. Nobody keeps it as pawn. Samman starts thinking and blaming his bad luck. He says, “How unfortunate I am. Today God has come to my house and I can not even feed him. Oh Parmatma! Why did you send such a sinful person on this Earth? I must have been a very sinful person who did not perform any virtuous deed in the previous birth. Now, what face should I show to Satguru?” Saying this he went into a the srore-room inside and burst into tears. Then his wife Neki said, “Have courage. Do not cry. God has come. He will be hurt. He will think that Samman is troubled by our arrival and is crying.” Samman stopped crying. Then Neki said, “Tonight you both, father and son, go and bring three ser (old measure of weight; around 1 kg) flour only for the saints and the bhakts.” Then son Seu said, “Mother, Guru Ji says that stealing is a sin. And then you also used to instruct me that son, one should never steal. Those who steal are completely ruined. What are you saying today, mother? Will we commit a sin, mother? Our bhakti will get destroyed. Mother, we will suffer in 84 lakh births. Do not say this, mother. Mother, I implore you by myself.” Then Neki said, “Son, you are right. It is a sin to steal, but son, we will not steal for ourselves but for the saints.” Neki said, “Son, the people of this city dislike us. We had told them that our Gurudev Kabir Sahib (Purna Parmatma) has come. He had brought back to life a dead cow and its calf who were split into half by Sikander Lodhi. He restored a dead boy and a girl to life. He terminated King Sikander Lodhi’s illness of burning pain. And Shri Ramanand Ji (Kabir Sahib’s Gurudev) whom Sikander Lodhi had killed with sword was also brought back to life by Kabir Sahib. The people of this city are ridiculing all this and say that your Guru, Kabir is a God; he will also fill your house with foodgrain. Then why are you wandering from door to door for flour? Son, these are ignorant beings. If, today, Sahib Kabir will leave without eating the foodgrain of this city then even Kaal God will become so annoyed that he might finish this city. Oh son! To prevent this mishap we have to steal. We will not eat. We will prepare Prasaad (blessed food) only to feed our Satguru and the bhakts.” On saying this, Neki’s eyes filled with tears and said, “Son, please do not say no.” then wiping the tears in his mother’s eyes, boy Seu said, “Mother, do not cry. Your son will obey your order. Mother, you are very good. Isn’t it?”

At midnight, both father (Samman) and son (Seu) went to steal. They bore a hole in the wall of a Seth’s (merchant’s) shop. Samman said, “Son, I shall go inside. If anyone comes, then inform me quietly. I will hand over the flour to you and you may run after taking it.” Then Seu said, “No, father. I will go inside. Even if I will get caught, then considering a kid they will forgive me.” Samman said,”Son, if they will kill you after capturing then how will I and your mother remain alive?” Thus, requesting Seu entered into the shop through the hole. Samman said, “Son, only bring 3 ser (1kg) flour, no more.” Tying nearly 3 ser flour in his ragged shawl, when boy Seu started to leave then he placed his foot on a weighing pan of a balance. A loud noise was produced, as a result of which the shopkeeper woke up and calling thief, thief, captured Seu and tied him to a pillar with a rope. Before this Seu threw that flour, tied in the shawl, outside through the hole and said, “Father, Seth has captured me. You may take the flour and feed Satguru and the bhakts. Do not worry about me.” After taking the flour Samman went home. Not finding Seu, Neki asked, “Where is the boy?” Samman replied, “Seth Ji has caught him and tied to a pillar.” Neki said, “You go back and bring Seu’s head by beheading him. Because on recognising the boy they will bring him to our house. And then seeing Satguru, the people of the city will say that he is the one who makes them steal. They may also cause trouble to Satguru Dev. We sinful people instead of food may show the cell to our Daata (generous God).” Saying this, a mother is telling her husband to behead her son, that too for Gurudev Ji. Samman held a dagger in his hand, went to the shop and said, “Son Seu, bring your neck out once. I have to say something important to you. We may not be able to meet tomorrow. It is possible that he may get you killed.” Seu said to that Seth (Baniya) that Seth Ji, my father is standing outside. He wants to say something important to me. Please loosen my rope so much so that my neck can go out of the hole. Then Seth accepted his appeal and loosened his rope so that his neck easily got out. Then Seu said, “Father, behead me. If you will not behead me then you are not my father.” Samman instantly struck with the dagger and on cutting the head took it home. On seeing the boy murdered, Seth dragged his dead body and put it in a nearby kiln.

Neki said to Samman, “You go back and you will find the boy’s trunk outside now. Bring it also.” When Samman arrived at the shop, by then the Seth had closed the hole in the wall of that shop. Samman following the traces of the dragged corpse reached the corpse and brought it home. He kept the trunk in the store-room and covered it with old clothes (tattered clothes) and placed the head on a shelf in an almirah, and shut the door.

After some time the sun rose. Neki took bath. Then prepared food for Satguru and the bhakts. And then requested Satguru Kabir Sahib Ji to have food. Neki respectfully served food in front of the trio, Sahib Kabir and the two bhakts (KamaaL and Shekhfareed). Sahib Kabir said, “Distribute this in six bowls and you three may also sit. Have this lovely blessed food.” On many requests also, Sahib Kabir did not agree, then the food was served in six bowls. The five sat down to have food. Then Sahib Kabir said –

Sahib Kabir said that Seu, come and have food. The thieves are beheaded and not the saints (bhakts). They are always forgiven. Sahib Kabir had just said this, when immediately Seu’s head became fixed on his trunk. There was no sign of cut on his neck, and Seu came, sat in the row and started eating. Say – Kabir Sahib (Kaviramitauja) Ki Jai (Hail to Kabir Sahib)!

Samman and Neki saw that there is no mark on Seu’s neck. How did the boy became alive? Went inside and saw that there was no head and trunk there. There were only splashes of blood, which was a proof left to dispel the doubts of this sinful mind (mann). Sat Sahib!!

Sahib Kabir (Kaviragni) has performed lots of such divine acts, from which it is self-evident that He is Himself, the Purna Parmatma. In Samved Sankhya no. 822, it is said that KavirDev extends the age of His lawful/true friend.