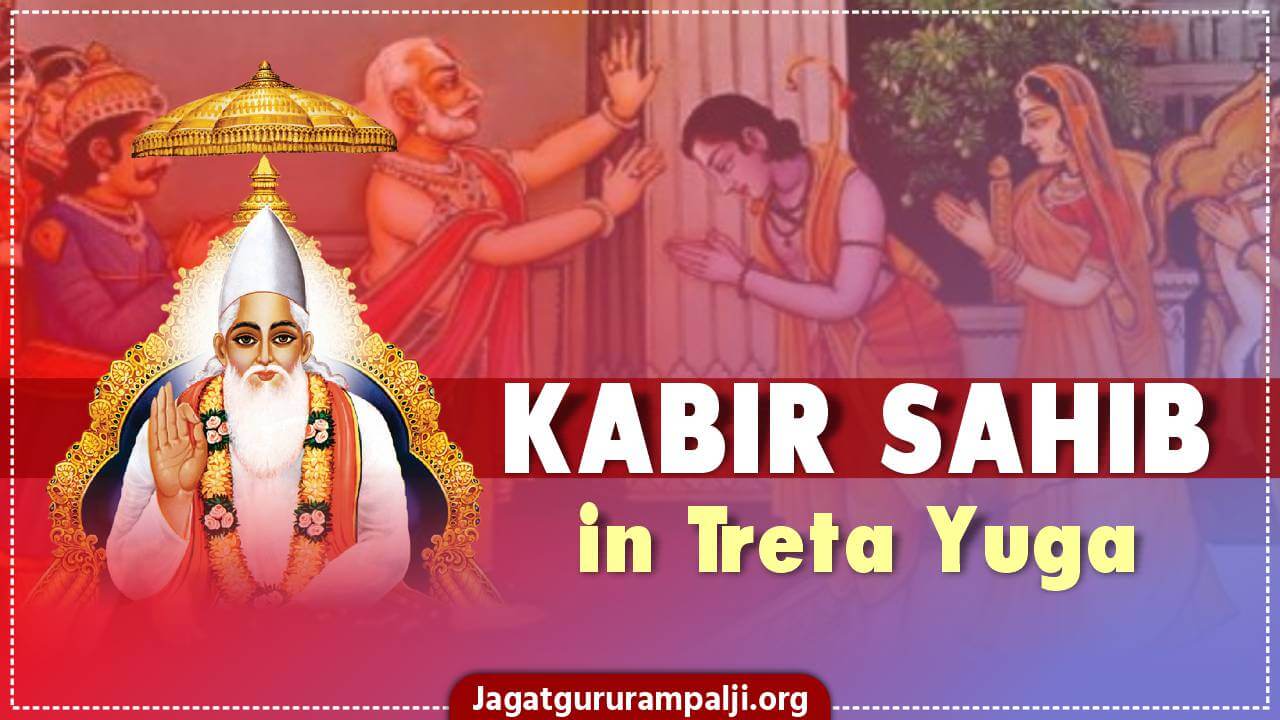 Muninder Rishi Taking Nal and Neel in to refuge

In Tretayug the Self-existent (Swayambhu) Kavir Dev (God Kabir; also known as Kabir Das or Sant Kabir) by transforming His appearance had come by the name Muninder Rishi. Anal i.e. Nal and Aneel i.e. Neel both were maternal cousins. Their parents had passed away. Nal and Neel both were excessively suffering from physical and mental illness. They had pleaded to all the sages and saints for removal of their suffering. All the saints said that this is a punishment of your sinful deeds performed in an earlier birth; you will have to bear it. There is no solution to it. Both the friends, disappointed from their lives, were waiting for death.

One day they both got the opportunity to hear the spiritual discourse (satsang) of Supreme God who had appeared by the name Muninder. After the satsang as soon as both of them touched God Kabir alias Muninder Rishi Ji’s feet and Muninder Ji kept his hand on their heads, their incurable illness vanished. In other words, both Nal and Neel became healthy. Seeing this wondrous miracle, falling at God’s feet, they kept crying for hours, and said, “Today, we have found the God whom we were searching.”, and impressed by that took naam (initiation) from him, and started living with Muninder Ji in his service.

In earlier times, the assembly (samagam) of saints used to be held on the bank of a river considering the arrangement of water. Nal and Neel, both were Godloving and innocent souls. They had a lot of devotion to God. They used to serve a lot. In the assemblies when ill, old and handicapped devotees used to come, then they used to wash their clothes and dishes. They used to wash their pots and glasses. But they were of an innocent mind. While washing clothes, they used to start discussing whatever tale of God they heard in the satsang. They used to become engrossed in discussion of God and things used to drown in the river water. They did not even use to realize it. Out of four items taken, they used to bring back two. Devotees used to say, “Brothers, although you do a lot of service, but also create a lot of problem for us. Now from where should we bring these lost items? You better stop serving us. We will serve us ourselves.” Then Nal and Neel used to start crying that do not take our service away. We will not lose them this time. But used to do the same thing again. Again used to engage in the discussion of God and things used to drown in the river water. The devotees finally requested Muninder Ji that please advise Nal and Neel. They do not listen to us, and if we forbid them, then they start crying. They do not even bring half of our belongings back. They become engrossed in the discussion of the talks of God heard in the satsang and things drown in the river water. Muninder Ji counselled them once or twice. They used to start crying that Sahib, do not take this service of ours away from us. Satguru Muninder Ji Said, “Son Nal and Neel, do a lot of service. From today onwards nothing will drown from your hands, be it a stone or a metal.” Muninder Ji gave them this blessing.

In Ramayana how was the bridge to Sri Lanka built?

Have you heard Ramayan? Once upon a time, Ravan abducted Sita Ji. Shri Ram did not even know who abducted Sita Ji. Shri Ramchandra Ji searches here and there. Hanuman Ji found out that Mother Sita is in Sri Lanka’s demon king Ravan’s captivity. On knowing this, Shri Ram sent a peace envoy to Ravan and requested Ravan to return Sita Ji. But Ravan did not agree. Preparations for the battle were done. Then the problem arose that how should the army cross the ocean?

Shri Ramchandra, standing in knee-deep water for three days, with folded hands requested the ocean to give way. But the ocean did not move a slightest bit. The ocean did not listen to him. Then Shri Ram tried to burn it with a fire arrow (Agni baan). Frightened ocean appeared in the form of a Brahmin and said, “Bhagwan (lord), everyone has its own limitations. Do not burn me. Who knows how many living creatures live in me. Even if you will burn me, you will not be able to cross me because a very deep crater will be formed here which you can never cross.”

The ocean said, “Lord, do something so that snake also dies and stick also does not break. My bounds are maintained and your bridge is also formed.” Then Shri Ram asked the ocean that what is that way? The ocean in Brahmin-form said that there are two soldiers named Nal and Neel in your army. They have such a power from their Gurudev that even stones stay afloat from their hands. Everything, be it iron, floats. Shri Ramchandra called Nal and Neel, and asked them if they had any such power. Nal and Neel replied, “Yes, even stones will not drown from our hands.” Shri Ram said, “Demonstrate it.”

Those fools (Nal and Neel) thought that today they will earn a lot of praise in front of everyone. That day they did not remember their Gurudev Shri Muninder (God Kabir) Ji thinking this that if we will remember him then Shri Ram might think that we do not have any power and we have asked for it from somewhere else. They took a stone and dropped it in water and it drowned. Nal and Neel tried a lot but the stones did not float. At that time, Shri Ram looked at the ocean as if was trying to say that you were lying. They do not have any power. The ocean said, “Nal-Neel, you did not remember your Gurudev today. Fools, remember your Gurudev.” They both realised that they have committed a mistake today. They remembered Satguru Muninder Ji. Satguru Muninder (God Kabir) Ji reached there. Shri Ramchandra Ji said that oh Rishiwar! It is my misfortune that the stones are not floating from your disciples’ hands. Muninder Ji said that now they will not float anymore from their hands because thay have become proud. Satguru Ji’s speech proves that —

From that day onwards, Nal and Neel’s that power ended. Shri Ramchandra Ji said to Parmeshwar Muninder Ji that oh Rishiwar! I am in lot of trouble. Show mercy, so that somehow the army gets across to the other end. When you can give power to your servants then God, have some mercy on me too. Muninder Ji said that this mountain which you see in front of you, I have drawn a line around it. Bring the stones which lie within it; they will not drown. Shri Ram asked for a stone to be brought for demonstration. When the stone was kept on water, it started floating. Nal and Neel were also sculptors. Hanuman Ji used to remember God everyday. He also kept performing his daily act by writing Ram-Ram on the rocks and also brought rocks from the mountain, one after another. Nal-Neel used to fix them in the bridge by sculpting them. In this way the bridge was built. Dharmdas Ji says —