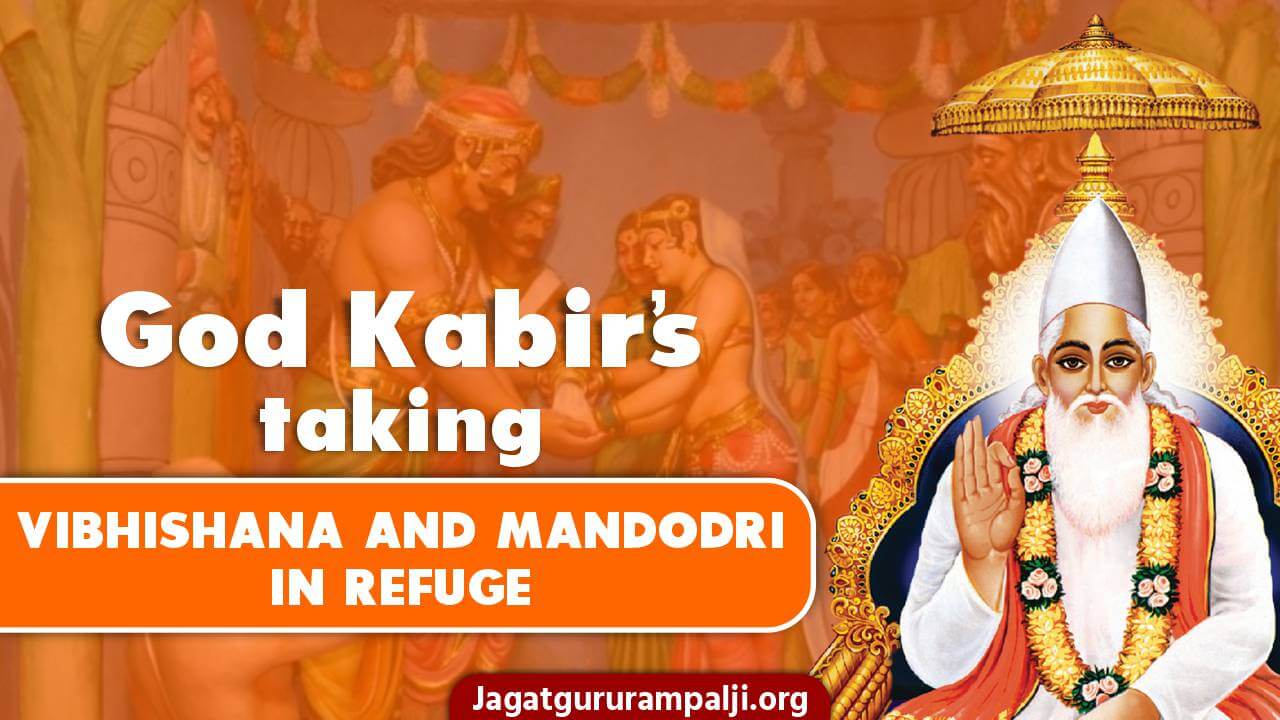 Parmeshwar Muninder after taking Anal i.e. Nal and Aneel i.e. Neel in refuge went to Sri Lanka. A sixteen-member pious family of a supreme devotee Chandravijay Ji used to live there. They were virtuous beings born in the Bhaat caste. After listening to the spiritual discourse of Parmeshwar Muninder (KavirDev / God Kabir) Ji, the whole family took naam-daan. The supreme devotee Chandravijay Ji’s wife Bhaktmati Karmvati used to serve King Ravan’s queen Mandodri. She used to entertain queen Mandodri by telling humorous good and bad jokes. Bhakt Chandravijay used to work (serve) in the court of Ravan. He used to please the king by singing the songs of praise.

Bhakt Chandravijay’s wife Bhaktmai Karmvati, after obtaining spiritual instruction (updesh) from Muninder ji started narrating the discussion of God, the story of nature’s creation which she had heard from her Satgurudev Muninder Ji, daily to queen Mandodri. Queen Mandodri started relishing a lot. Bhaktmati Karmvati used to keep on narrating the true tale of God for several hours and tears used to trickle from Mandodri’s eyes. One day Queen Mandodri asked Karmvati, “From whom did you hear this knowledge? You used to speak nonsense. This much transformation can not take place without a God-like Saint.” Then Karmvati told that we have recently taken updesh from a Supreme Saint. Queen Mandodri expressing the desire to meet the saint said, “This time when your Guru Ji comes, then bring him here.” On getting the order of her mistress, bowing her head respectfully, Karmvati said, “Whatever your order, your maid will obey it but I have a request. It is said that one should not call a saint by order. It is auspicious for one to go personally and attain audience; otherwise, whatever is your order, will be obeyed.” Queen Mandodri said, “This time when your Gurudev Ji comes, then let me know. I will personally visit him.” Parmeshwar Muninder ji then again showed grace in Sri Lanka. Queen Mandodri obtained updesh. After sometime she got her dear brother-inlaw Vibhishan Ji obtain updesh. Mandodri after taking updesh started remaining engrossed in the sumiran of God day and night. She also requested her husband Ravan many times to obtain updesh from Satguru Muninder Ji, but Ravan did not agree and used to say, “I have done bhakti of supreme power, Mrityunjay (one who has won over death) Shiv Ji. There is no power equivalent to him. Somebody has misled you.”

After sometime only, abducting the banished Shri Sita Ji, Ravan captivated her in his Nau lakha garden. Even on Bhakmati Mandodri’s repeated requests, Ravan did not agree to return Mata Sita Ji. Then Bhaktmati Mandodri Ji said to her Gurudev Muninder Ji, “Maharaj Ji, my husband has abducted another woman. I am unable to tolerate this. He is not agreeing to return her at any cost. You have mercy, my Lord. Todate, I had not seen such a grief in my life.”

Parmeshwar Muninder Ji said, “Daughter Mandodri, this woman is not an ordinary woman. Shri Vishnu Ji had to come to earth because of a curse. He is Ramchandra, the son of King Dashrath. He is the resident of Ayodhya. He has been exiled for fourteen years and Lakshmi Ji herself in the form of Sita as his wife was in exile. Ravan has abducted her deceitfully by disguising as a sage. Lakshmi Ji is herself this Sita Ji. It is in Ravan’s benefit if he, returning her immediately, asks for forgiveness and begs for his life.”

Even on Bhaktmati Mandodri’s numerous repeated requests, Ravan did not agree and said, “Those two jokers wandering in the forest, what harm they can do to me. I have infinite army. I have one lakh sons and a lakh and a quarter relatives. My son Meghnaath by defeating Indra, the king of heaven, has married his daughter. We have captured thirty-three crore gods. You want to scare me by telling those two homeless wanderers living in the forest as Gods. I will not return this woman.”

Mandodri explained the knowledge of the path of bhakti heard from her venerable Gurudev to Ravan a lot. Vibhishan also advised his elder brother. Ravan beat his brother Vibhishan and said, “You are taking Shri Ramchandra’s side a lot; go to him.”

One day bhaktmati Mandodri requested her venerable Gurudev, “Oh Gurudev, my wifehood is under threat. Please you also advise my husband once. If he will not listen to you, then I will not regret becoming a widow.”

Parmeshwar (the Supreme God), who had appeared by the name Muninder, accepting the request of his daughter Mandodri, standing in front of King Ravan’s court, requested the gatekeepers to allow him to meet King Ravan. The gatekeepers said, “Rishi Ji, our king is holding a court at the moment. At the moment, the message from inside can come out, but the message from outside can not go in. we are helpless.” Then Muninder Ji disappeared and appeared in the court of King Ravan. When Ravan saw Rishi Ji, he asked in a roaring voice, “Who has allowed this Rishi to come in without my order. Bring and kill him in front of me.” Then Parmeshwar Muninder said, “King, your gatekeepers had clearly refused me. They do not know how I came inside.” Ravan asked, “How did you come in?” Then Supreme God in Muninder form disappeared and appeared again and said, “This is how I came in.” Ravan asked, “Tell me the reason for coming.” Then God said, “You, being a warrior, have abducted a woman. This is against your majesty and valiance. This is not an ordinary woman. She is herself the incarnation of Lakshmi. Shri Ramchandra Ji, who is her husband, is himself Vishnu. Returning her beg for your life. Your benefit lies in this only.” On hearing this, the worshipper of Tamogun (God Shiv) Ravan roaring in anger jumped from his throne with a naked sword in his hand and blindly served seventy blows with his sword on Muninder Ji with an aim to kill him. Parmeshwar Muninder Ji was holding a slender stalk of a broom in his hand; He moved it forward as a shield. Ravan’s seventy blows struck that delicate stalk. It sounded as if the sword was striking against an iron pillar. The stalk did not move even slightly. Ravan started sweating due to exhaustion. Even then out of his arrogance he did not agree. He, however, realised that this is not an ordinary Rishi. Ravan said that I am not going to listen to any of your talks; you may go. Parmeshwar (Muninder Ji) disappeared from there, went to Mandodri and narrated the whole account to her. Queen Mandodri said, “Gurudev, now I will not have any problem becoming a widow.” Muninder Ji departed from there.

Shri Ramchandra and Ravan fought a battle against each other. Ravan was killed. The kingdom of Lanka which Ravan had obtained by doing tough sadhna of Tamogun God Shiv by sacrificing his head ten times, that transient happiness also went away and he went to hell. On the contrary, Vibhishan, the worshipper of Satnaam of Supreme God, even without doing tough sadhna, by the grace of God got the kingdom of Lanka. For thousands of years Vibhishan enjoyed the pleasure of the kingdom of Lanka and by the grace of God, there was complete peace in the kingdom. All the people of demoniac nature had died. Bhaktmati Mandodri, Bhakt Vibhishan, all the sixteen members of the family of the supreme devotee Chandravijay Ji and others who, after taking updesh from Muninder ji, did true bhakti according to the rules throughout their lives, all those worshippers remained happy here on Earth as well as in the end, sitting in Parmeshwar’s aircraft, went to Satlok (Shaashvatam Sthanm). That is why in Holy Gita Adhyay 7 Shlok 12 to 15, it is stated that those whose knowledge has been stolen by the transitory comforts obtained from the sadhna of the three gunas (Rajgun- Brahma Ji, Satgun-Vishnu Ji and Tamgun-Shiv Ji), those men with demoniac nature, the lowest among men, the evil-doers, fools, do not worship me (Kaal / Brahm).

Then, in Gita Adhyay 7 Mantra 18, God (Kaal / Brahm), the narrator of Gita, is saying that rarely a noble soul does only my (Brahm) sadhna because he did not find a Tattavdarshi Saint. Those noble souls also remained dependent on the state of my (Anuttamam) very bad (Gatim) salvation. They are also not completely liberated. Therefore in Holy Gita Adhyay 18 Shlok 62 has said that oh Arjun, you may go in the refuge of that Parmeshwar (Purna Parmatma – Tat Brahm) in every respect. By only His grace, you will attain supreme peace and Satlok i.e. the Sanatan Param Dhaam (Eternal Supreme Abode).

Therefore it is a request to the pious souls that today this servant of the servants (Sant Rampal Das) has the true method of attaining Purna Parmatma. Take advantage by taking free-of-cost updesh.