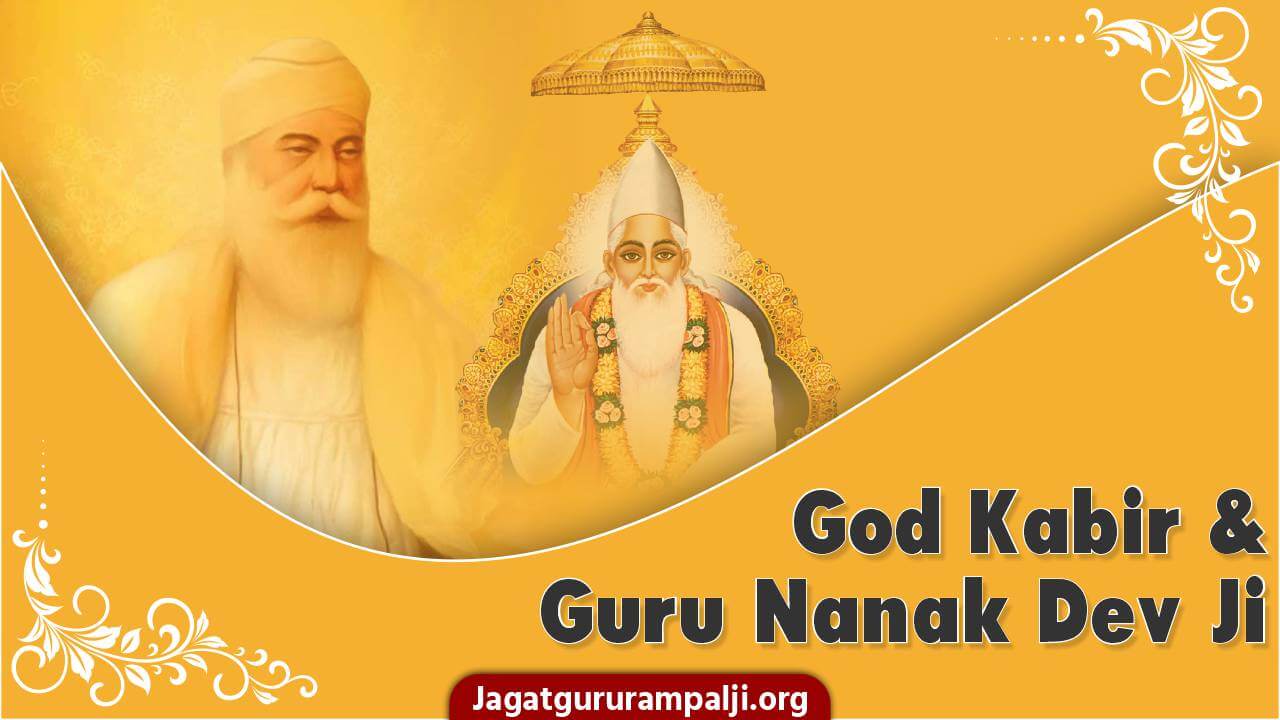 Shri Nanak ji used to work in the store of the Nawab of Sutanpur by the grace of his brother-in-law Shri Jairam ji in the town of in-laws of his sister Nanaki. He had boundless love in God because this pious soul had done holy bhakti of Brahm God (Kaal) through the ages. In Satyayug this very Nanak ji was King Ambreesh and used to do Brahm-bhakti considering Vishnu ji as his deity. Great ascetic sage like Durvasa accepting defeat had gone in his kingdom to seek forgiveness.

In Treta Yug, the soul of Shri Nanak ji became King Janak Videhi, who came to be known as Sita ji’s father. Sage Sukhdev who was son of Great sage Vedvyaas used to fly in the sky with his supernatural power, but had not taken initiation from a Guru. When Sukhdev went to the Heaven of Vishnulok, he was returned because of not having a Guru. By the order of Vishnu ji, he made King Janak his Guru and then obtained a place in Heaven.

Then in Kalyug, the soul of this very King Janak took birth in a Hindu family of Shri Kaluram Mehta (Kshatriya) and was named Shri Nanak.

As it is excerpt from “Jeevan Das Guru Saheb”

Every morning Guru ji used to go for bath in River Bein, which used to flow near the city Sultanpur. One day when you plunged into water, you did not come out. After some time, your servant, who holding clothes was sitting on the bank of the river, went home and gave the news to Jai Ram ji that Nanak ji has drowned, then Jai Ram ji went to the river taking along the divers. They searched a lot for you, but you were not found. After searching a lot, everybody returned to his homes.

Great concern and distress was being expressed at Brother Jai Ram ji’s house, when on the third day in the morning only a devotee taking bath came home and told sister that your brother is sitting on the bank of the river. On hearing this, Brother Jai Ram ji ran towards Bein, and as the news spread many more people also arrived there. When in this way you were surrounded by people, you quietly reached at your shop. A crowd of women and men started coming at the shop with you. On seeing the crowd, Guru ji opened the door of the store, and said whatever one needs may take it. After getting the store plundered, Guru ji wearing the attire of a Fakir went and sat in a graveyard. When the Nawab got the news of plundering of the store and departure of Guru ji, he sent for Jai ram and got the account of the books inquired by the clerk. After seeing the accounts, the clerk told that the government owes Rs 760 to Guru ji. On hearing this the Nawab became very happy. He called for Guru ji and said that don’t be upset. Taking your balance amount continue the job of store. But Guru ji said that now I will not do this job. God has ordered me to do some other job. The Nawab asked what have you been ordered? The Guru ji uttered the Mool-mantra (original mantra).

The Nawab asked that when did your God gave this order? Guru ji told that when I had gone to bathe in River Bein, I had gone to Sachkhand from there to my Lord, there I was ordered that Nanak ji, you chant this mantra and by making others chant convey the people of Kalyug across. Therefore I have to now obey this order of my Master. Brother Gurdas ji writes this context in Vaar 1 paudi 24 –

Meaning – Baba Nanak ji went to Sachkhand. There you attained the treasure of nine riches, naam and fearlessness. Here on the bank of Bein, where Guru ji appeared after coming out of Bein, a Saint ghat by Guru and a very beautiful Gurudwara Ber Saheb has been built. On this very place Guru ji after bathing in the morning used to sit for some time in the meditation of God.

Meaning:- Most venerable God Kabir acquiring the form of a Jinda Mahatma went to Punjab (At the time Western Pakistan was a part of Punjab province) to meet Shri Nanak ji and had this dialogue there. God Kabir said to Nanak ji that if a pious soul like you is bearing the sufferings of life and death, then what hope does a common man have. The Supreme God is different to the one you are worshipping and considering formless. I am that God. Ever since you have separated from me, you have attained 60,000 births, some with very good high posts like that of pious soul King Ambrish in Satyug, King Janak (Father of Sita ji) in Tretayug and in Kalyug you have become Shri Nanak Sahib. Even then you are in the cycle of life and death. I will tell you the jaap of Satshabad i.e. Satnaam / Sachha naam Mantra through which you will become eternal. Shri Nanak ji said to God Kabir that you are Bandichhor God and only a rare fortunate individual can identify you.

Special Consideration:- Shri Nanak ji saw weaver Kabir of Kashi in Satlok (Sachkhand) and then saw Him working as a weaver and then told that the same Dhaanak (Weaver) was present in Satlok in Satpurush form.

Shri Nanak ji asked Pandit Brijlal that you say that the knowledge of Gita ji was given by Shri Krishan ji and that Shri Krishan ji is incarnation of Vishnu. Shri Vishnu ji is unborn, God of all and immortal. They don't have any mother or father. You also say that Brahma is Rajgun, Vishnu is Satgun and Shiv is Tamgun. This only is trigun maya. But God, the giver of knowledge of Gita is saying in (1) Gita Adhyay 2 Shlok 12 and (2)Gita Adhyay 4 Shlok 5 that he is in life and death and is mortal. (3) In Adhyay 15 Shlok 4 and (4) Adhyay 18 Shlok 62, God, the giver of knowledge of Gita is asking to go in to the refuge of some other God is saying that complete happiness and salvation is only by the worship of that God. I (The giver of knowledge of Gita) am also in His refuge. (5) In Gita Adhyay 7 Shlok 15 the giver of knowledge of Gita ji is saying that those whose knowledge has been stolen away by Maya i.e. by being dependent on the short-lived benefits obtained from the sadhna of Rajgun - Brahma, Satgun - Vishnu, Tamgun - Shiv ji who do not even do my worship i.e. Brahm sadhna, let alone of the supreme God, who are only limited to these three gods, such men who have demoniac nature, who are lowest among men, the evil-doers, fools, do not worship me i.e. that keep doing sadhna of the three gunas (Rajgun - Brahma, Satgun - Vishnu, Tamgun - Shiv). The worship of above three gods is prohibited. (6) In Adhyay 7 Shlok 18, the giver of knowledge of Gita is saying his worship to be of inferior quality. That is why in Adhyay 18 Shlok 62, has said that to attain eternal peace and complete salvation, go in to the refuge of that Supreme God. (7) In Gita Adhyay 4 Shlok 34, there is evidence that for complete knowledge and salvation find a Tattavdarshi Saint. I do not have the complete knowledge about the Supreme God. Worship that God according to the knowledge given by a Tattavdarshi Saint. This same question was put to Shri Nanak ji by God Kabir Sahib on the banks of river Bein.

Shri Nanak ji after attaining this tattavgyan from God Kabir saw Him in Satpurush form in Satlok (Sachkhand) and then in weaver (Dhanak) form in Kashi (Banaras / Varanasi) surrendered himself and then spread this tattavgyan to everyone and then achieved salvation.

Important:- Holy Sikh society is not in agreement with the fact that Guru ji of Shri Nanak ji were Kabir Sahib (weaver) of Kashi. Instead they have said Guru Nanak Dev ji to be the Guru of Supreme God Kabir Sahib. But what is the name of Guru ji of Shri Nanak ji? On this subject the Sikh society is mum whereas Shri Nanak Sahib ji himself in the Amritvani of Mehla Pehla accepts that he met his Guruji in the form of a Jinda. The same was present in the form of a Dhanak (weaver) by the name True Kabir (Hakka Kabir) on earth and was also seated in Sachkhand and provided him the true naam.

Respectable Shri Nanak ji was born in 1469 AD and went to Sachkhand in 1539 AD (Holy Book - "Jivni Das Guru Sahiban"). Respectable Kabir Sahib ji appeared on this earth as Dhanak in 1398 AD and went back to Satlok in 1518 ("Holy Kabir Sagar"). Both Great men were contemporary for 49 years. Shri Nanak Sahib ji was born in Holy Hindu religion. After attaining God Shri Nanak ji declared that "there is no Hindu or Musalmaan" All are children of the same Supreme God. Shri Nanak ji did not make any religion rather liberated the humans from the artificial shackles of religion and started the "Disciple Tradition". Like thosse who take initiation from Gurudev are called 'disciples', the same are called 'Sikh' in punjabi. Like today this das has around one million disciples but this is not another religion. Pious souls from all the Holy religions are getting their well being done. If in the time to come someone starts a new religion then that will be a misfortune. A new wall of differences and struggle will come up but no benefit will be gained.